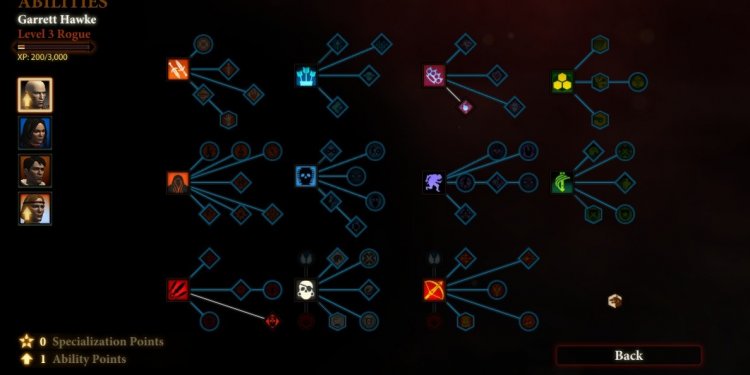 Double weapon specialists often rely on speed of assaults rather than power. Pretty much everything within tree must certanly be added to any rogue's arsenal of death-dealing attacks. Backstab is very useful against mages and adds a somewhat unintended complication of being capable escape a dire circumstance simply to re-appear with a lethal hit to an enemy's backside. Unforgiving Chain must be found for its impressive stacking +critical possibility per hit. Twin Fangs grants another great window of opportunity for hefty harm against single goals.

Varric's Bianca heading is basically a facsimile of the Archery tree, both of that offer a combination of widespread AoE assaults as well as pinpoint lethality. Bows have actually a rather slow firing rate and must trust high critical chances and injury to result in the DPS actually count. Bursting Arrow coupled with Brittle alllow for a deadly combination against waves of enemies, and Archer's Lance is a great single target capability that shreds most targets upon contact. Pinning Shot is another good ability to pick up.

This tree is dedicated nearly entirely to afflicting different condition effects and producing possibilities for maximum damage or group control. Every rogue receives the Miasmic Flask capability automagically, but its improvement leaves little becoming desired. The upgraded Fatiguing Fog may be worth noting for the capacity for obscuring opponents and its own Disorient applications. Likewise, Confusion offers a 50percent possibility of enemies fighting amongst by themselves, however the horrendous tiny section of effect negates its usefulness.

The Stealth on its own is a little underwhelming. Whenever combined with the Shadow specialization, however, it becomes really worth getting along side Ambush.

Whilst each for the three suffered capabilities supplied seems attractive and of use on its own, you can't combine all of them therefore, you're stuck using choosing only 1. But for a rogue like Varric or Isabela Speed just isn't a bad option, although Harmony could be the desired capability. Unfortuitously, it's quite far into the tree.

Apart from Blindside, the majority of the capabilities listed below are superseded by much better and much more lucrative capabilities from other trees. Like, Pinpoint Strikes beats Twist the Knife, and Armistice and Goad disentangle various other characters from their aggressors - really, using the role of a tank but a less efficient one. Brand is advantageous in particular circumstances against tough bosses perhaps. In general, Scoundrel doesn't provide a great deal in the way of playing a rogue if you don't shoehorn the rogue into a strange tank type of role.

A suitable marriage of Assassin and Shadow transforms your rogue into an extremely mean, effective device of death. More particularly, Pinpoint Precision from Shadow and Pinpoint Strikes collectively hammers down a full world of pain upon its target. Beyond that, the Assassin tree is not bad at all. Complement the Pinpoint combo with Bloodlust to continuously pummel your adversary with a barrage of venomous assaults. Then, once you support by using Devious Harm your rogue just becomes ridiculous. Abilities like Assassinate should be made use of when Pinpoint Strikes is not offered plus it does deal decent damage also.

Shadow expertise emphasizes becoming evasive and attacking with well calculated, premeditated lethality. Perhaps one of the most valuable abilities is Inconspicuous, which excels at becoming a reliable get-out-of-jail card once the stress of attracting too-much aggro starts to get also hot. It just does not remove only a little hazard, it reduces it to nearly zero, causing you to as most likely a target as a cockroach skittering across the battlefield. This is certainly, a really dangerous cockroach. With regards to actually working out of the hurt, Pinpoint Precision is your go-to capability, passively upping your crucial damage by 25per cent. Along with Pinpoint Strikes from the Assassin tree you'd be a force becoming reckoned with. Decoy is an appealing and more effective spin on Sebastian's Guardian Angel ability, nevertheless the takeaway effect doesn't hold much water in comparison to the superiority of hidden.

The Duelist tree is designed to isolate single objectives and just take them straight down with swift, cool efficiency. Duelists also provide beneficial auras to your whole celebration and may apply decent debuffs also. Honestly, however, this tree is counterintuitive towards the part of a rogue, that will be to focus on subterfuge combat and take advantage of hidden weaknesses when attention isn't trained regarding the rogue. If you still prefer to play your rogue in this manner, then these types of abilities as Throw the Gauntlet and its particular upgrade help lure solitary targets toward the rogue while at the same time afflicting with stat-reducing debuffs. Vendetta outshines the remainder capabilities by being one of the better unpleasant abilities readily available right here since it can deal both direct damage and take advantage of the Stagger condition effect.

Isabela's specialization seems to guide the lady toward sort of off-tank part, just who centers around redirecting threat from even more frail characters once the tank is occupied. This isn't also odd if you think about the efficacy and deadliness of Isabela's capacity to provide swift and death-filled stabs to her opponents, making her liable to draw aggro nearly straight away. Below the Waterline reduces an enemy's defense and All Hands on Deck can be effective against groups of enemies.

Bianca's tune and its own update including Rhyming Triplet tend to be fundamentally all this dwarf needs.

an ability that tasks a decoy to deceive the adversary? Appears pretty awesome, however in application it really is even more flashy than pragmatic, though it does shed present aggro. Guardian Angel gives method to Maferath's Advance and Holy Precision, which benefit the Starkhaven exile.