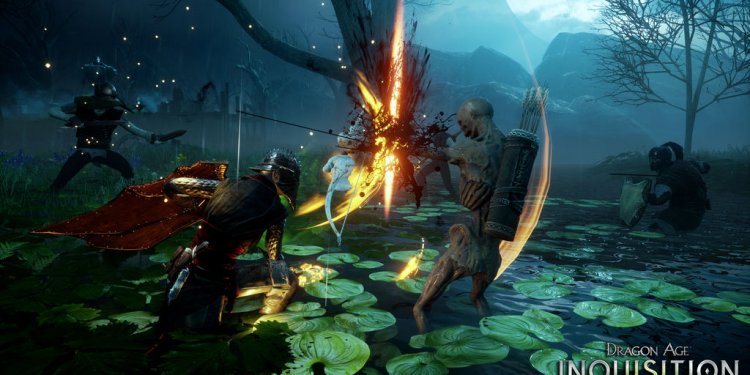 DA: Origins is an old-school and medicore game only appealing to a tiny market niche. DA II breaks the medicority, and introduces the popular mass effect decision tree and button-mashing mechanics, which attracts tons of Call Of Duty (COD) and action gamers around the world, contributing to its great success. However, it still suffers from a linear and small game world, and repetitive dungeons.

DA: Inquisition evolves from its predecessors by combining the best elements of 2 popular RPGs in modern era. It adopts the sandbox open world, lightweight RPG perspective and enormous fetch quest system from the highly praised Elder Scroll Skyrim, as well as the popular decision tree mechanism and the combat elements from another Bioware's master piece, Mass Effects 3.

By having a cohesive reasonance of 2 best elements from 2 outstanding RPGs, and adding tons of creative elements, this game simply becomes one larger than the sum of all parts. You have a large world to explore, tons of item collection and FedEx quests to play with, and the best button mashing mechanics to finish off your opponents. Skyrim and this game is great because they both remove the annoying character stat building mechanism. Stat is now only granted from equipment, how amazing and creative, isn't it? In addition, this game adopts the perfect RPG gaming style of Skyrim, i.e. explore first, just forget the plot, which removes player's frustration to recall memory about the main quest and story line. This is just like a great and sincere invitation to all COD fans and action gamers, as well as any potential causal gamers. It caters for the taste of all gamers around the world via greatly enhancing its accessibility. It is a master of everything rather than a jerk of all trade. This is a game for everyone!

You may worry about that the return of the old-school tactical view from the mediocre DA:Origins may ruin your fantastic game play experience. Don't worry about that, it is just implemented for those hardcore players for their happiness in pausing the game all the time, breaking the pace of combat. This game can be handled easily by controlling your own character only under an action game style. The tactics setting of companion is simplified to an user friendly level for further accessibility. In contrast to DA: Origins, you can’t set up some complicated tactics for your companions, but this is unnecessary anyway. Friendly fire is disabled by default, so just forget your companions, and let them either fight or fall. You can handle fights easily by charging upfront and having high reflex in right timing of attack, dodge and button mashing. You can enjoy a fluid flow of combat all the time!

Overall, by removing the complexity and annoyance from old-school RPG, adding the best elements from 2 most famous modern RPGs, and introducing an exciting button mashing combat mechanics to the game, this game has reached the highest height of RPGs that none in the world could ever reach. This is a milestone of RPG development, and should be referred to in future development of RPGs. Today is an important day that marks the beginning of revolution in RPG history! A new era of RPG has come! From now on, we can step forwards and forget about all classic RPGs in the old-school days. Everyone, express your praise and gratitude towards our beloved developers, and join us to have fun in this master piece of art now!

In case if there are expansions or sequels for this gift from god, which are highly probable considering how successful this game is, we really hope that first-person shooting mode, QTEs and the mechanism of climbing tower to reveal map can be implemented. This will further induces passion from every gamers, because these elements are universally regarded by every gamer as the best features that have ever existed in shooter and action games!

By the way, I am looking forwards to see at least 1000 DLCs for this game, because its scope is so huge, and with so much potential to further expand on. Don't keep us waiting, our wallets are ready! We hope that our beloved developers will listen to our suggestion and request, and release the DLCs and expansions ASAP for us. ;)